Last Sunday, I wrote a fun little something for this platform called “Jerome Powell May Live To Regret These Statements“, in which I flagged a series of comments the newly appointed Fed chair made at an IMF/SNB event earlier this month.

Here, for anyone who missed it, is what Powell said about the likely resilience of emerging markets (EEM) as the Fed normalizes policy:

Monetary stimulus by the Fed and other advanced economies played a relatively limited role in the surge of capital flows to (emerging market economies) in recent years.

There is good reason to think that the normalization of monetary policy in advanced economies should continue to prove manageable for EMEs. Markets should not be surprised by our actions if the economy evolves in line with expectations.

In the first piece linked above, I gently suggested that while rising U.S. rates and the ongoing rally in the dollar (UUP) needn’t necessarily lead to a broad-based unwind in EM, past a certain point it won’t be possible to contend that the only real issues here are a recalcitrant Erdogan in Turkey and a crisis of confidence with regard to the Argentine peso.

In other words, there’s only so long you can lean on the idiosyncratic, country-specific stories excuse when the pain is spilling over to other locales amid a continual rise in U.S. rates and still more dollar strength. Although it’s really only possible to know this in hindsight, often (and this doesn’t just apply to emerging markets) we discover that what we thought were “idiosyncratic” stories were in fact coal mine canaries or, to mix metaphors, the wobbliest dominoes.

As I noted last Sunday, “what you’ve seen recently in the Brazilian real and also in Indonesia is evidence of contagion.” I started talking at length about the Indonesia story weeks ago and around the same time, BofAML’s Michael Hartnett (he’s the guy who told you to sell based on his “perfect” indicator back on January 26, a week before things got dicey), said this about the Brazilian real:

EM FX never lies and a plunge in Brazilian real toward 4 versus US dollar is likely to cause deleveraging and contagion across credit portfolios.

Well, this week, Indonesia hiked rates for the first time since 2014 and Brazil’s central bank eschewed what would have been a 13th consecutive rate cut in an effort to put the brakes on the currency pressure.

Neither effort was effective. In Indonesia’s case, the rupiah plunged to its lowest since October 2015 on Friday:

Have a look at the selloff in bonds (benchmark yields for Indonesia are up some 65 bps this quarter, that would be the largest quarterly jump since late 2016):

In short, the rate hike is not going to be enough. Capital flight is accelerating.

As for Brazil, the “hawkish” decision to forgo another rate cut similarly failed to assuage concerns and worse, it deep-sixed Brazilian equities. The real continued to fall, hitting a two-year low on Friday and I think you’ll agree that what you see in the following chart looks like trouble:

And look, if you’re in the camp that’s predisposed to suggesting none of this matters until it spills over into developed markets, do your friends who hold the popular iShares MSCI Brazil Capped ETF (EWZ) a favor and don’t feed them that line, ok? Have a heart. Empathize. Because they just had their worst week since the circuit breakers were tripping last May:

When it comes to Brazil there’s probably no need to panic just yet. There’s some electoral uncertainty, but nothing that should justify what you see in the currency.

“BRL is slightly weak but not too devalued. This is not an overshooting,” Goldman’s Alberto Ramos told Bloomberg in an e-mail, adding that this is a reflection of external shocks (think: stronger dollar and rising U.S. rates) that “are common to other EM currencies.”

He did go on to note that we could see 4.00 on the BRL, but that “would require the intensification of global EM FX pressures and more concern about the October election.”

Right. Well when it comes to “the intensification of global EM FX pressures” (i.e., when it comes to the kind of 30,000 foot view), the MSCI EM FX index has fallen for six of the past seven weeks:

It was down every day this week.

And how about the iShares JP Morgan EM Local Government Bond UCITS ETF? Well, it’s down handily, has seen some $550 million in outflows this month alone, and as Bloomberg notes, hasn’t seen a net inflow since March:

Look at the slide in its market cap just over the past two months: 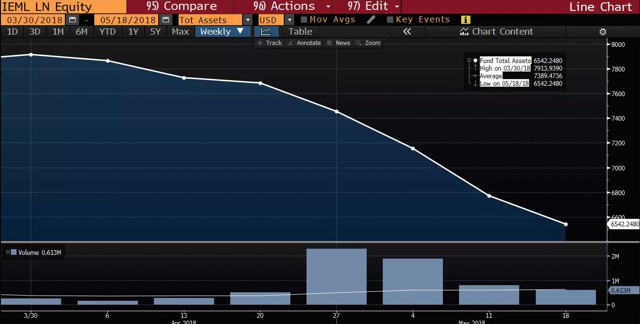 Now, let me take a moment to remind you that I have been persistently warning about Turkish President Recep Tayyip Erdo?an’s penchant for pushing a laughably unorthodox “theory” about how higher interest rates cause inflation and currency depreciation. If you follow Turkey, you know all about this. Here’s what I said in the post linked here at the outset:

In case you were under the impression that Erdo?an is going to be inclined to moderating his stance on interest rates (which, in his bizarre version of economics, cause inflation if they’re too high), he is going out of his way to ratchet up the rhetoric and disabuse you of that idea on a daily basis.

Well, do you know what he did this week? He went on Bloomberg TV and all but confirmed that once next month’s election is out of the way, he’s going to effectively commandeer monetary policy. You can watch that interview for yourself here and/or read my longer commentary here, but suffice to say it pushed the beleaguered lira to a fresh all-time low and confirmed everyone’s worst fears about what’s going to happen once he officially consolidates power:

As an amusing aside, if you’re following along on Twitter, you knew that Bloomberg interview was bound to cause trouble: 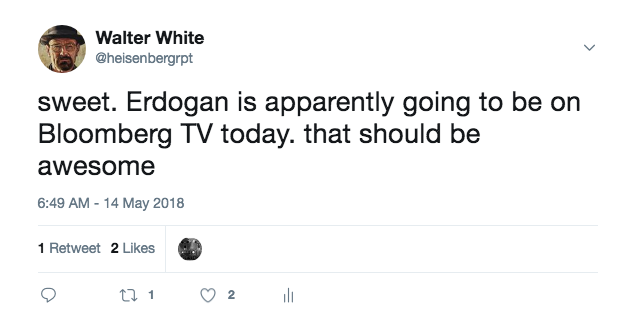 Oh, and remember how the dollar rally stalled last week? Yeah, well it resumed this week, rising for the fourth week in five: 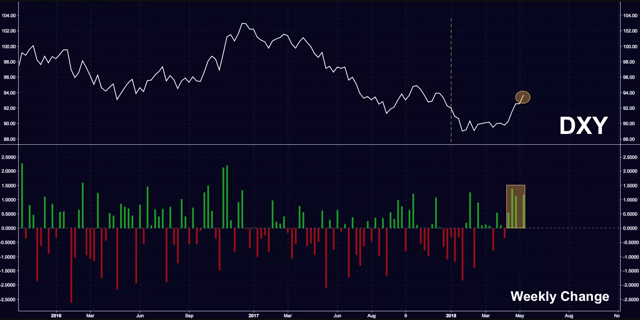 What you’re seeing here is not only notable, but extremely important for what it says about how the environment is shifting as the Fed normalizes. As I’ve been keen on noting for at least a year, everything became one trade as QE drove everyone down the quality ladder in a relentless hunt for yield and as dovish forward guidance kept rates vol. anchored. That’s now reversing.

How violent that reversal will ultimately be is debatable. Some folks think it wouldn’t be the worst thing to just let emerging markets go. The following excerpts are from the latest by former trader turned Bloomberg columnist Richard Breslow:

These positions can be put to the test without necessarily having negative implications for the broader asset classes. In fact, it may represent a very positive development. A big chunk of these trades weren’t originally done because people were feeling chuffed. They were just desperately searching for yield and following the bidding of the central banks.

But if you’re fascinated by big names, then you might note that Carmen Reinhart is concerned. Here’s what she said this week about emerging markets:

The overall shape they’re in has a lot more cracks now than it did five years ago and certainly at the time of the global financial crisis. It’s both external and internal conditions. This is not gloom-and-doom, but there are a lot of internal and external vulnerabilities now that were not there during the taper tantrum.

And then there was this from El-Erian (via Twitter): 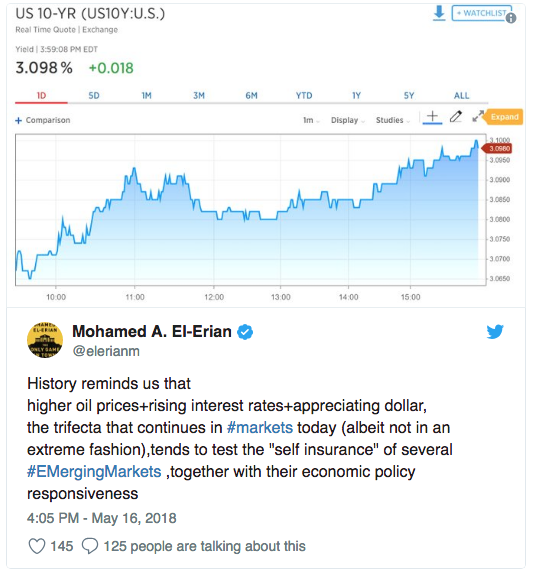 Now look, if what you want to do is pretend as though this is all immaterial for developed market investors, then by all means, but just know that this is one of those scenarios where the old adage about being “entitled to your own opinions but not your own facts” applies. As Heisenberg readers know, I generally despise old adages, but that one is apt here.

This is absolutely material for all investors and the whole point of documenting the spillover from Turkey and Argentina into other locales and charting the decline in various indices and funds is to demonstrate that rising U.S. rates and the stronger dollar are the proximate cause of the problem.

This is all a consequence of the buildup of imbalances in the QE era. It was always a matter of how smoothly the unwind of all the trades that are part and parcel of the global hunt for yield would be and the verdict from emerging markets right now is: “not smoothly”.

Trade accordingly. Or don’t. It’s up to you. But don’t say you don’t have the information you need to make an informed decision.

Disclosure: I/we have no positions in any stocks mentioned, and no plans to initiate any positions within the next 72 hours.

I wrote this article myself, and it expresses my own opinions. I am not receiving compensation for it (other than from Seeking Alpha). I have no business relationship with any company whose stock is mentioned in this article.